These Hills Are Ours

On 1 October, Daniel Bye and Boff Whalley bring their show These Hills Are Ours to The Horton. They chatted to writer and broadcaster Nick Ahad, about the show and what it means to them. 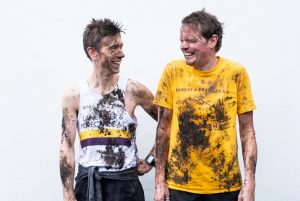 Boff Whalley adds: “The bottom line for everything we do, especially using song is that we’re going ‘here’s lots of ideas and philosophy and thought and politics’ but actually, it’s entertainment, first and foremost. It has to be.”

Time spent with Whalley and Bye is always thought-provoking, entertaining and worthwhile. Above is an example of how they speak when they’re just chatting and it’s pretty rousing stuff. When they are sharing thoughts and words they have crafted, worked on and learned, as they are in the midst of doing ahead of a nationally touring theatre show, the result will be something pretty powerful.

Boff Whalley and Dan Bye are theatre makers (and so much more, but we’ll come to that) who are collaborating not for the first time for a touring project called These Hills Are Ours.
The publicity shots for These Hill Are Ours feature a couple of blokes – Whalley and Bye – in running gear and covered head to toe in mud; hence the disclaimer from Bye that this isn’t a show only about running.

Over the course of an hour talking about the show, it becomes clear while the publicity shots suggest it might be, These Hills Are Ours is going to be about an awful lot more than just running.

At one point Whalley talks about the show and when he’s finished it’s amazing to discover he’s just sitting down in a cafe, rather than standing on a literal soapbox.

“I want the show to serve as a reminder to people that when they go out into the countryside, whether they are running or walking, they are walking in the footsteps of a history and a culture of people who have opened up those paths for all of us. Anyone who goes walking in the Peak District for example, I’d love it if they know that a time not that long ago, you couldn’t and I’d love it if they knew where that came from and why they now can, especially in today’s climate” he says.

“Nye Bevin said the NHS will will survive as long as there are people with the strength to fight for it and I think that can be extrapolated and applied to just about any improvement that has been gained by progressive movements in any sphere.”

Bye and Whalley were first brought together in 2009 when the latter wrote Play Up, Play Up, a theatre piece performed as part of the I Love West Leeds Festival. Bye was brought in to direct and it was a happy creative partnership, although Bye puts the whole thing down to serendipity, suggesting he was brought in because ‘the director they wanted was unavailable.’

They discovered they both lived in the Armley suburb of Leeds and became mates ‘who went to the pub to watch football together.’

Inevitably, it seems, the conversation would generally turn toward running, a passion for both.

Just how obsessed are they with running?

Whalley warns: “Oh no, don’t get him started.”

Bye comes back: “Says the man who’s written a book on the subject (Whalley pleads guilty – his Run Wild was published in 2012).”

Whalley concedes: “Yeah, the conversation does tend to drift towards running.”

Bye is a well-regarded theatre maker whose solo hit shows include The Price of Everything, Going Viral and the hit 2019 Edinburgh Fringe show Arthur, which saw his baby son take centre stage.

Whalley was the songwriter and member of anarchist pop band Chumbawamba, still best remembered for their world-conquering hit Tubthumping. He’s since become a highly regarded writer of musicals for theatre.

Bye says: “I was never over-awed by meeting someone who had a top ten single. Didn’t it go to number two? (The ensuing conversation reveals it was kept off the top spot by Men in Black and then Elton John’s Candle in the Wind).

“I was never particularly impressed by that, but when I found out his 10k time I just thought ‘I am in the presence of greatness.”

Whalley says: “It was about 32 minutes.”

They need steering back to These Hills Are Ours. They are both, clearly, a little obsessed with running. They are also two socially engaged, socially conscious theatre makers. How to combine the two?

Bye says: “We started with the idea of running from the centre of a town or a city to the peak overlooking that city. It was a way of exploring the relationship between urban and rural and the nature of that journey because normally people will drive to a rural place, go for a walk then drive back to the uban place but there’s something interesting and different that happens on that journey. It’s also an exploration of the fact that we’re allowed to go to rural space because of things like the Kinder trespass so we have the freedom to go on journeys in wild places because of historical acts of protest, that not a lot is known about.”

The Kinder Mass Trespass was an act of wilful trespass by ramblers and members of the Young Communist League on Kinder Scout in the Derbyshire Peak District in 1932. It was designed to highlight the fact that walkers in England and Wales were denied access to areas of open country.

Bye adds: “There are plenty of other places like that in the country where thousands of people trespassed over the course of many years until the laws of access gradually changed, so it’s a celebration of the fact that we are allowed to do that.”

Whalley says: “It’s also about the idea that we live in times when we are bombarded by digital technology and our notion of landscape and commonality and doing things together has changed. We think that includes looking at a screen when in fact there’s this great groundswell of people doing things with other people – going out walking, running and cycling, gardening, sewing and baking. All these activities are booming because people are running away from just being on call 24 hours a day.”

There’s a lot for these two to say and a lot going into the show. So how to turn it into compelling theatre?

Bye is going to run. For 24 hours. From his house in Lancaster, crossing the Forest of Bowland, the Pennine Way and going all the way to Kinder Scout. Whalley will meet him along with the way in a support vehicle – and then tour the country telling some of the story of what happened, along with the Kinder Trespass and a lot more. And there will be songs, composed by Whalley.

Bye says: “The show is just a mechanism for exploring the countryside. It’s about the transition along the way and the urge to escape 21st-century life or your difficult childhood or the constraints of class, it’s a celebration of what’s been won for you by the people who went before you. It’s about all of those things and running is just our way of celebrating that.”